All the information you need

There is significant evidence to show that wholesale & retail, as a sector, was one of the fastest to recover when restrictions were eased in June, but still one of the hardest hit from the economic fallout of Coronavirus. The anecdotal testimony of the consequences of the crisis has been prevalent since February, and now the economic data seems to support the ‘word on the street’. 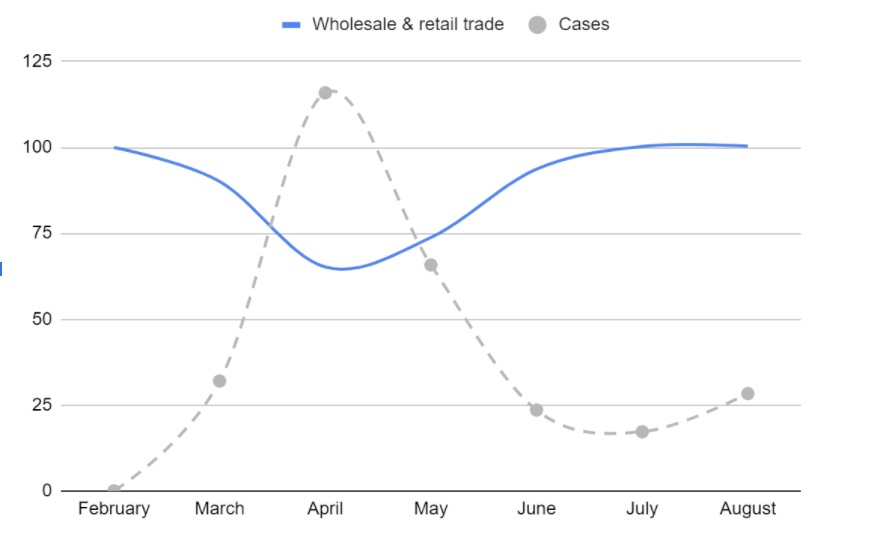 In the week ending 18 October 2020, overall footfall decreased to below 70% of its level in the same period of the previous year. 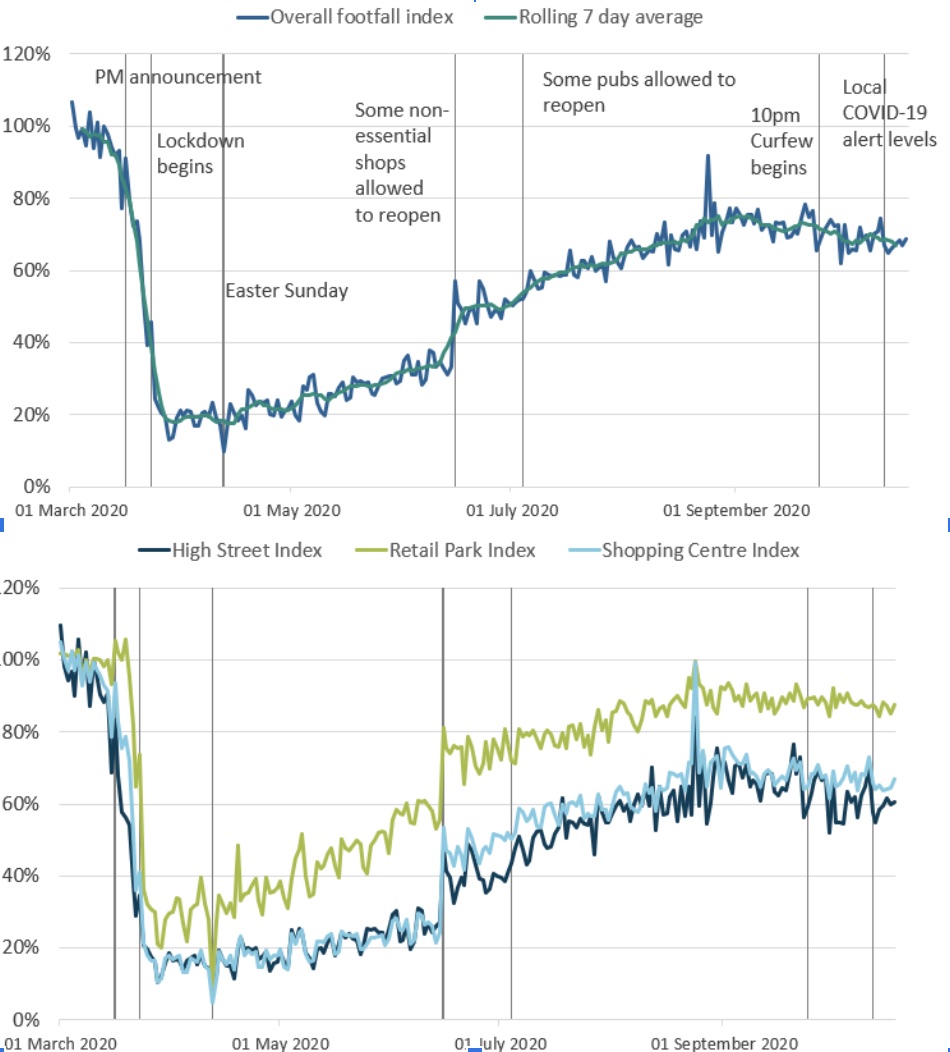 Retail sales volumes continued to increase over five consecutive months, after the sharp drop in February.

September saw the value of retail sales increase by 1.4% and volume sales by 1.5% when compared with the previous month. When compared with February 2020’s pre-pandemic level, retail sales were 3.9% and 5.5% higher in value and volume respectively. A strong rate of growth is seen in the three-month on three-month growth rate at 17.7% and 17.4% for value and volume sales respectively. This is the biggest quarterly growth seen on record as sales recovered from the low levels experienced earlier in the year.

In September, clothing sales were 12.7% lower than in February, while department stores were 0.9% lower. Volume sales in household goods stores and “other” non-food stores increased to 11.0% and 10.7% above February, respectively. Feedback from household goods stores had informed the ONS that home improvement sales from DIY and electrical goods stores did well in to help with the recovery of sales. 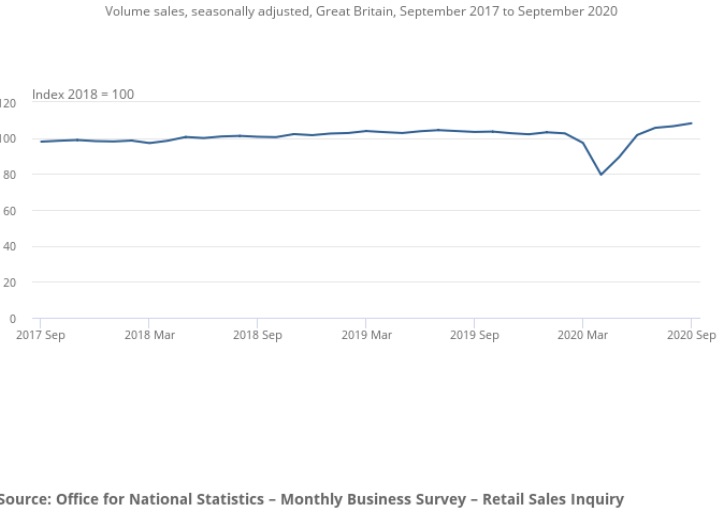 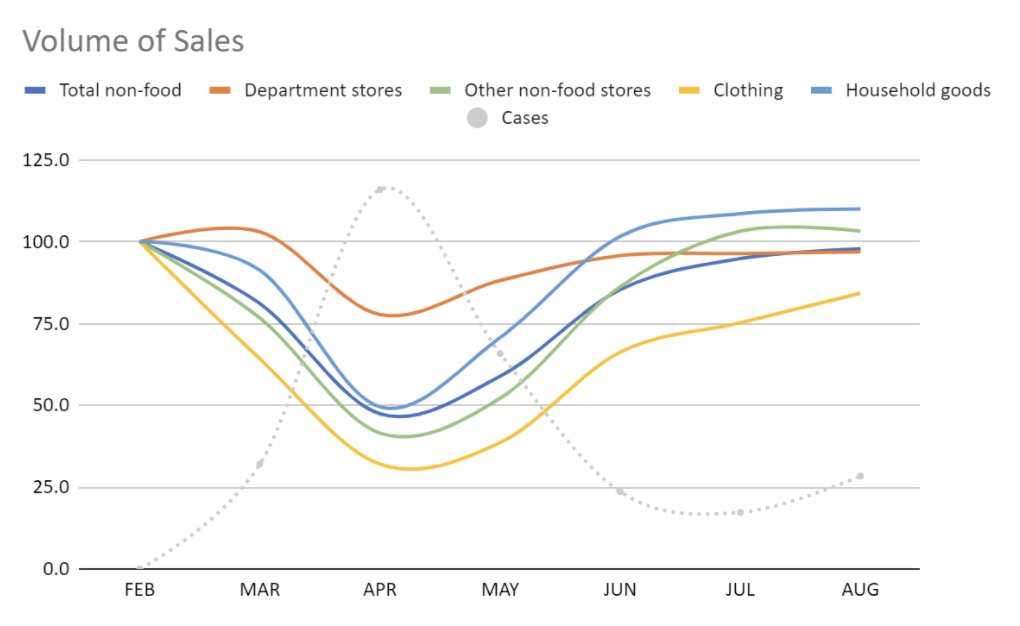 The proportion of online spending peaked during lockdown and still remains higher than in February.

Online sales rose across all sectors when compared with the same time a year earlier. This is because of online sales reaching higher than usual levels over the course of the pandemic. Department stores were the only stores to increase sales in September when compared with August. Feedback to the ONS from these stores stated that the online pre-ordering of a new range of gaming products helped boost their sales. 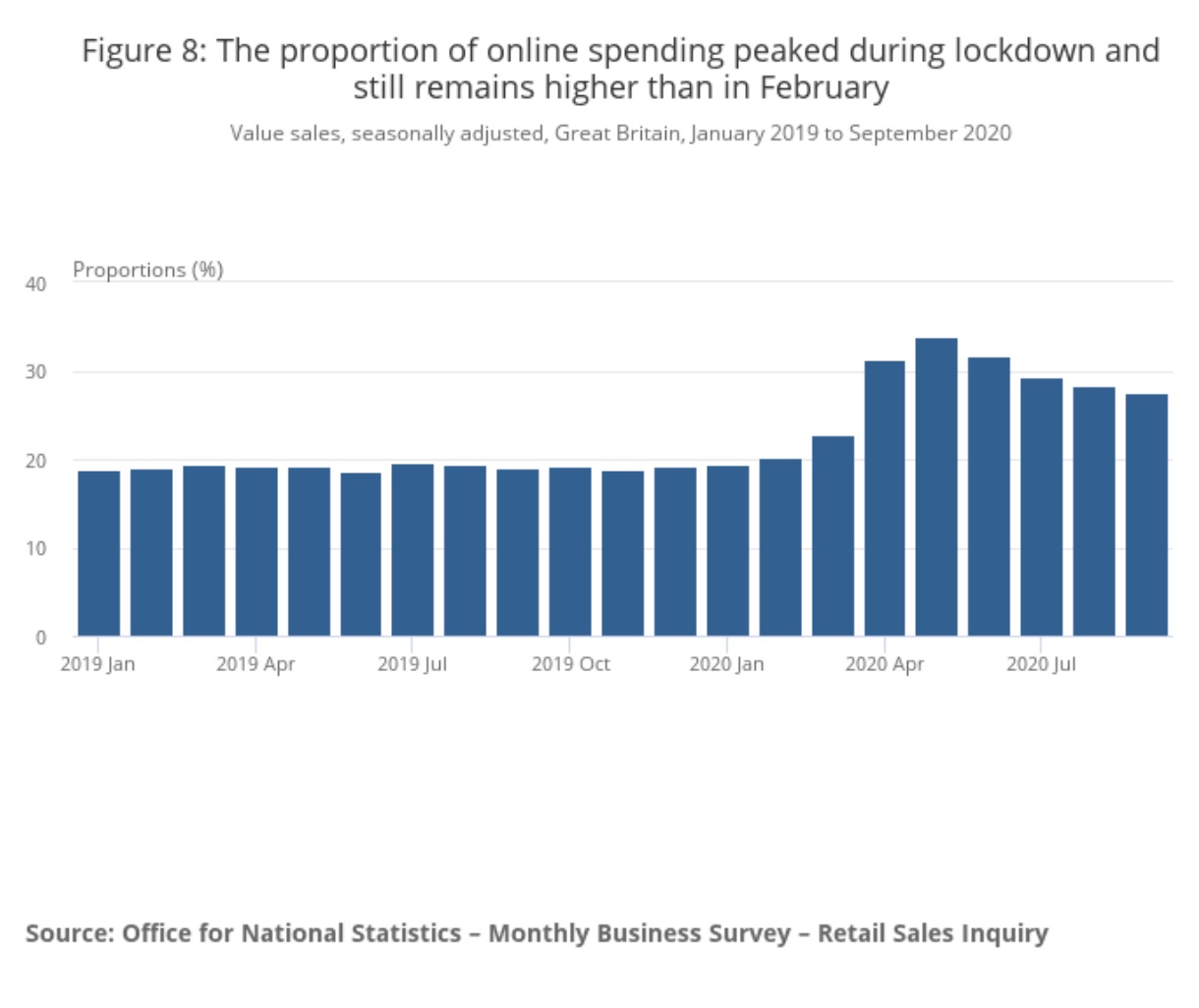 Will further restriction hurt the industry?

The data indicates there could be longer-term effects on the sector, with household income being squeezed, but there is clear induction that financial support - partially from the Government-back schemes - has had a positive impact, which helped businesses within wholesale & retail continue trading.

The Financial Conduct Authority recently estimated that 12m people are struggling with bills or loan repayments as a result of the pandemic, with under 35s the most likely to be affected. The shortage of money in the British public’s pockets will have a knock-on effect on the long-term recovery of the sector. This is supported by the IHS Markit UK Household Finance Index which, in September, showed there was a reduction in household spending, savings and personal credit availability.

Data from the Office For National Statistics, Business Impact of COVID-19 Survey (BICS) on the 22 October 2020 in the Wholesale & Retail sector found:

Funding for a Furniture Manufacturer

When a furniture manufacturer found that he had run into cash flow problems, he discovered that they were made worse bec...

CBILS Case Study: getting CBILS when the bank said no

Funding a lifeline for a linen supplier - how two CBILS loans were better than one TL:DR Not many businesses will come...